Veterans are eligible for certain national burial and headstone and marker benefits.

VA will pay up to $2,000 toward burial expenses for deaths on or after September 11, 2001, or up to $1,500 for deaths prior to September 11, 2001. If the Veteran is buried in a VA national cemetery, some or all of the cost of transporting the deceased may be reimbursed.

An annual increase in burial and plot allowances for deaths occurring after October 1, 2011 began in fiscal year 2013 based on the Consumer Price Index for the preceding 12-month period.

VA does not pay burial benefits if the deceased:

You may also go to your local regional benefit office and turn in your application for processing.

Other information regarding VA burial benefits such as flags, headstones and markers is provided by the National Cemetery Administration. 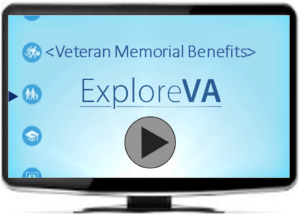 Automobile Grants for Disabled Veterans
Get Your Service Records